After working in TV Animation for over 20 years, I have adjusted to the hiatus and the layoff. You say goodbye to your family of friends on each crew and make new friends on the next. Every crew is different... Some shows where comic book geeks prevail, some where comedy is the key story element. You adapt your talents and style to fit the creator's (not to be confused with God) concept and storyline. You make it work and take it a step further to make it beautiful to look at. You learn to anticipate each director's preferences and detect mistakes before they're made.

This is your career and you care A LOT about the final product.
While working with many talented artists and writers, you develop a mutual respect and support one another. Even if you don't get along with someone, you root for their success, because it is a group effort. Everyone counts and you are only as strong as your weakest link. If someone is behind, it effects everyone, especially the people at the end of the line. If the budget is too small, everyone is pressured to work extra hours for free and take a cut in pay. The producers put pressure on you to do the impossible and make unrealistic deadlines. Some people work every day to make those deadlines which only shows the producers that it can be done. Then they make the deadlines even tighter and pay even less. It's a vicious cycle.
However, instead of bitching about the business of entertainment, I want to focus on the things that I love... The stories, the gags, the characters, the paintings, and the crews are all what keep me coming back for more. Artists like to tell stories on TV and we can only do it with the help of a large crew. So here goes: A few of my favorite things.....
At Klasky Csupo during the early days of The Simpsons, I had some of the best experiences of my career. There were the late night Twister games in our layout room. Nancy Kruse would bring her flute in. Eric Stefani and Eric Keyes were the young studs in the studio... Still in college. All of the women in the studio had a crush on them. We had the funniest animators (in my opinion) who kept all of us entertained.... Ken Bruce, Brad Bird, and Rich Moore... All liberal with the intercom. Wes Archer would occasionally do a cartwheel in my doorway. David Silverman taught me an enormous amount about timing in animation. One of my favorite sequences I ever worked on was the seduction scene between Marge and the French bowling instructor that David pretty much animated entirely.... I cleaned up the BGs, and color keyed the sequence. 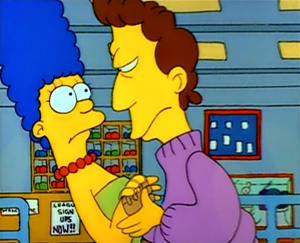 Itchy and Scratchy was a fun new cartoon within a cartoon that Brad Bird was passionate (well, Brad was always passionate) about and he and I worked together on finalizing the BGs and color. I loved working with Brad because he was so enthusiastic and fun. There was Gabor inviting us into his office for late night pizza or drinks. He had a recording booth on the second floor and was often recording electronic music. There was an Oxberry camera somehow on the 3rd floor of the Highland building (we were afraid it might fall through the floor and crush someone). We could use the camera.... often. I cannot imagine any studio allowing you to shoot your own scenes now! There was the video room with a homemade box above that had about 20 wires connected to different boxes. None were labeled. Eventually you knew which wires connected the video feed to the monitor and various other equipment. It reminded me of Lily Tomlin's operator character. There were the various celebrities visiting to develop new cartoons with Gabor. I was lucky to work on most development during the four years I was there. The Russians, Hungarians, and various Eastern Block countries were represented. I learned a few Russian curse words while sitting in the same room with 3 Russians. I worked with one of my favorite comediennes, Lily Tomlin, on her project. She was always complimentary (especially of my eyebrows), and had a large entourage with her whenever she came in. I especially remember how sweet Jane Wagner was and what an amazing team those two are. 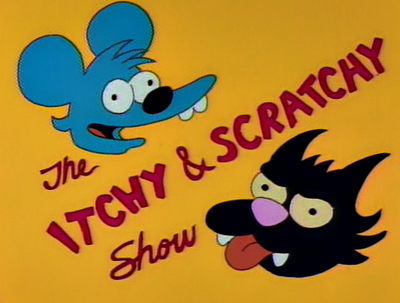 (this yellow is waaayyyy off BTW)
After Klasky Csupo, I moved onto Rocko's Modern Life at Games Animation...Now Nickelodeon. The intercom was open to everyone, so we had daily entertainment and sound FX thanks to Tom Yasumi. John McIntyre had a talk show at his desk. Anyone could stop by and sit in the guest chair for an interview. Nick Jennings was one of the best bosses you could have, and funny. It was the first time I worked with Conrad Vernon who was one of the funniest guys I had EVER met.
When I worked at Disney TV, I got to work with Conrad again and watch his hilarious pitches, one of which he did in a 70s tuxedo. Mike Bell, Paul Tibbitt and Mike Mitchell were also hilarious and I never laughed so much as on Nightmare Ned. It definitely was the funniest crew I have ever worked with. Conrad did some great drawings one of which I taped to the wall and tried to paint on the wall.... while covering it with Conrad's drawing. It never was completely finished, so I painted my shelf instead. Someone at Disney TV still has my old shelf. Nightmare Ned was also the first time I was allowed to go crazy with design and color. Donovan Cook kept the execs at bay and we got away with a lot of great humor and creativity.

There have been thousands of incredible and fun experiences that have made these years great. One rude producer, or one crooked executive hasn't ruined it for me. But, they sure do make it difficult. Working with ethical producers makes all the difference in the experience. When you spend the majority of your life with a crew, you need to enjoy your job. I know there will be more of those good experiences in my future....
Posted by cwyatt at 10:06 PM