I got out of the house Saturday!

And ventured all the way over the hill to Hollywood...

The Animazing weekend was full of fantastic and famous speakers, shorts, and commercials. Some of the commercials I remembered from my childhood.

Although the speakers were beyond animazing, I took breaks every 20 minutes or so to stare at the scarob ceiling inside the Egyptian Theater. It's quite distracting y'know. Why don't they make theaters like that anymore?

Here are some of my sketches intermingled with scribbled notes, mostly incomprehensible. Some of the notes were written without my knowledge...Like, "Tex Avery....Awesome!" I really don't remember writing that.

Start with a lot of descriptions:


How do you show thinking? Feeling?

What is she thinking?

How did she get that way?

Make sure your actions match your character!

Posture? How does it convey emotion? What is the essence of the pose?

How does your character react while another character is talking? Reaction?

Keep your character the same throughout film so you can take a turn with him at some point.... Steve Martin also described the same thing when writing a character. To make sure to not go crazy with a character until you are ready. Otherwise, the character will not be believable. Once you establish your character, you can do something absurd with him/her.    Or something to that effect.

Then Eric drew a lot of action lines to demonstrate emotion in posture. I remembered doing this in college life drawing classes. 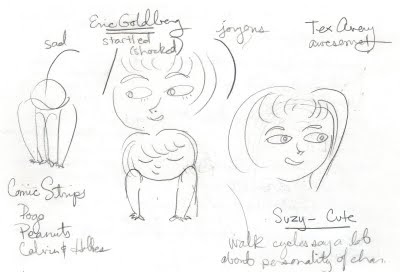 Of course I got off on a tangent and drew faces. I always forget the bodies.

Eric Talked a lot about timing.... Give your characters enough room to act and move. Must see the movement or all of that gorgeous animation won't communicate.

Anticipation! Juggle the timing... Create a rhythm then break the rhythm.

I have no notes from his presentation because I was engrossed in watching the commercials. We studied his company's commercials in our graphic design classes in college and I was always a huge fan! Luckily, I was able to work on a couple of commercials at Kurtz and Friends in the 80s.

He talked a lot about the difference between computer animation and hand drawn animation. Drawing by hand GENERATES ideas and you have many happy accidents. The computer is a tool to convey those ideas.

Instead of taking notes, I drew an eyeball bouncing and a couple of squirrels (I think). 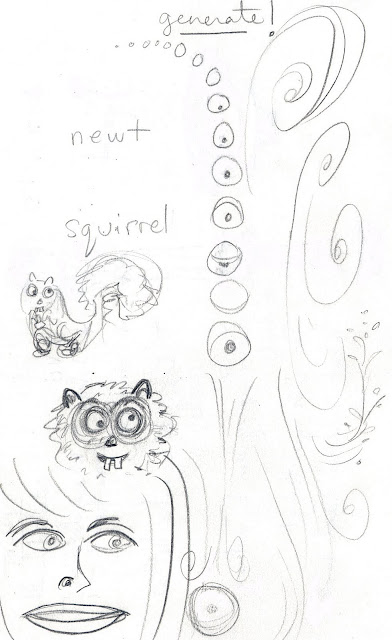 He gave a great presentation on CG animation and I learned A LOT!!  I already knew most of his work, especially Technological Threat, which as nominated for an Oscar in the Shorts category. And the Mick Jagger music video from the 80s.

All I can say is CG is amazing! But, it looks so technically difficult. I really hope to continue creating new paintings for film and TV rather than become a photo realistic matte painter. I'm crossing my fingers.

Jurassic Park, Babe, Narnia, Troy...So much CG now. In everything!

The coolest thing Bill Kroyer showed us was how the computer programs of fight sequences practically run themselves. It was pretty humorous to watch characters looking for other characters to kill. Once they kill one, they go looking for another to kill...And so on... Until they're all dead.


Another thing I learned: Riggers are mathematical geniuses and I don't think I could be one.

Brad Bird developed a new fun CG style called SQUELCH for The Incredibles at PIXAR. Basically it's Squash and Stretch mixed together. On the Simpsons, he told me to animate the characters by drawing them like hard rubber. No elbows and knees.The Incredibles were much stretchier, but same idea.


Bill talked about motion capture and how impossible it is to truly generate a soul from putting diodes all over peoples faces and bodies. Sometimes you gotta animate facial expressions for them to have a soul.

Gollum's face in Lord of the Rings was mostly animated while his body was motion capture, or MOCAP. All of the incredible acting Gollum did with his face was animated.

James Cameron is trying something new that may work a little bit better at capturing facial expression. He is painting the actor's faces with special paint and a special camera picks up minute details for the computer.
Orrrr... Live action works.

He gave a presentation on story and short film making.

Since development work is one of my most favorite jobs in the whole world, his presentation inspired me to clean up my desk and do some more painting.

He asked, What kind of short film would you want to see? And make that film.... 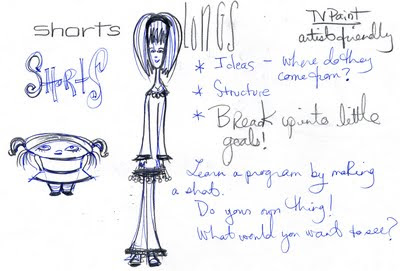 He showed us Your Friend the Rat and his own short, Leonardo...Which was incredible!

I am so impressed and just can't believe that someone can stay glued to their own short film for 5 years...Or longer! How do these guys do it?

Your Friend the Rat was a PIXAR short that I was drooling over.... And asking myself...Where was I when they hired all of those UPA style artists? Couldn't I fly up to Emeryville once a week for a meeting and do fun paintings down here in So. Cal? This short was, is, and always will be hilarious and gorgeous! And it is fun to see people you know from 20+ years ago directing, writing, and producing incredible stuff.


Jim continued on about story structure in film and I learned a lot of new things...
Like shorts are SHORT! 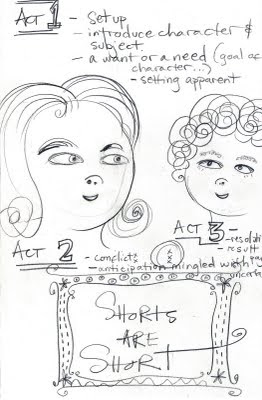 ACT 1: Set up. Introduce character and subject. Goal of the character. The want or need. The setting/environment.

There were more notes, but they got mixed in with my daughter's school's See's candies fundraising poster I was sketching.

The evening was a lot of fun and exciting. I watched most of the shorts and was very impressed with the concepts and techniques. Stop motion has really come a long way. Some of the CG films were so gorgeous! The timing was really well done.

Time to finish that poster....